Function to automatically vary the speed of the electronic shutter based on subject brightness to maintain constant output signals. This function is ideal for various applications - for example, when varying the magnification on TV-monitor microscopes. It can also be used in lieu of aperture adjustments with fixed-aperture lenses or optical systems that lack aperture control, like endoscopes.

The ratio of the vertical and horizontal size of a display screen. NTSC systems use a ratio of 4:3. A ratio of 1:1 is used for medical applications, including X-ray systems.

Refers to a phenomenon in which intense light entering the imaging unit appears to spread to surrounding areas.

A standard mount mechanism used to mount 16 mm imaging lenses, as shown in the figure below.

Camera Link, an interface standard for communication between a camera and frame grabber board, has been reviewed and standardized by the AIA (Automatic Imaging Association) with the goal of standardizing previously non-standardized interfaces for cameras and grabber boards.

A standard mount mechanism used to mount 16 mm imaging lenses, as shown in the figure below.

・Frame transfer CCD A CCD that transfers signal charges photoelectrically converted at the photoreceiver to the accumulator during vertical flyback time and then scans in sequence for each line using a horizontal transfer CCD. 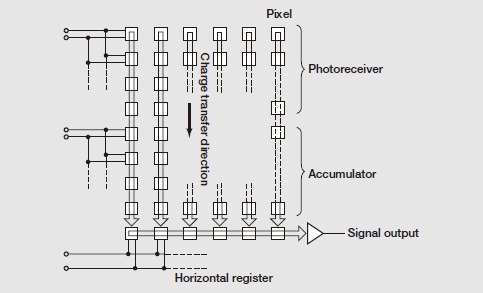 ・Interline transfer CCD A CCD that transfers the signal charges photoelectrically converted at the photoreceiver en masse to the vertical register before transferring vertically, transferring horizontally, and scanning each line from the CCD. 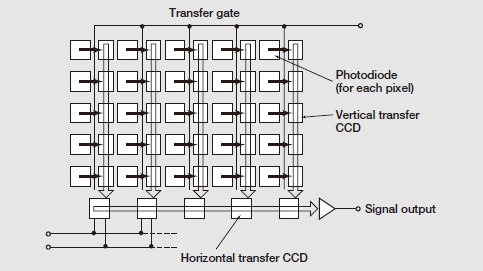 CMOS is an abbreviation for "complementary metal oxide semiconductor", a widely-used semiconductor for LSIs and memory. A CMOS image sensor outputs images by scanning the photodiode and amplifier for each pixel. The main advantages are low current consumption and random scanning capacity. 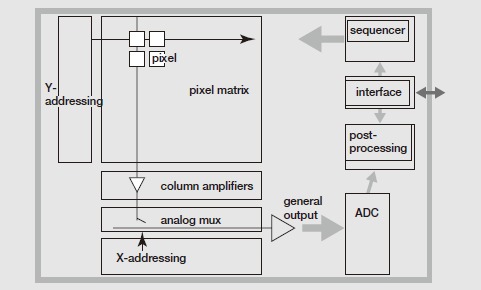 A color standard signal used to adjust the color of color monitors. This may take the form of a color bar signal generated electrically by a color bar generator circuit or a color bar chart used for camera adjustments. A color bar consists of seven colors - white, yellow, cyan, green, magenta, red, and blue - counting from left to right.

Interference between pixels occurring when brightness signals leak into the color signal, resulting in color at points where there should be no color.

Refers to signal leakage between circuits for a reference channel and adjacent channels when the same circuits are used for multiple channels. Crosstalk is normally quantified in decibels (dB).

Dark current is a signal current present when all light to a lens is blocked; it increases with ambient temperature. Lower values are preferred for image processing applications.

An abbreviation for "design rule for camera file system", this is the standardized format for digital camera recording. It comprehensively stipulates the folder configuration and folder/file naming rules for storing images on memory cards to improve compatibility between different DCF-compliant devices.

Refers to the range of distances over which the subject remains in focus. Depth of field increases as the camera is moved farther from the subject with short focal length lenses or stopped-down lenses.

Refers to the display time per dot (pixel) converted to frequency.

The EU/US 19-inch rack standard for racks and unit chassis. The width of a single standard chassis is 482.6 mm (19 inches), while heights are multiples of 44.45 mm (= 1U). The Japanese JIS industrial standard specifies a chassis unit width of 480 mm and height in multiples of 50 mm (= 1J).

Refers to the RS-644 standard stipulated by the EIA for reduced voltage, reduced EMI, and high-speed data transfers.

All Toshiba Teli cameras with product codes ending in L (e.g. CS3330BLi) and the LG510 peripheral electronic line generator are able to display electronic lines or reticules on monitors by superimposing them on the video signal. Up to two vertical and two horizontal electronic lines can be moved using the front panel knobs or switches. The lines can be switched between negative and positive, and gain (brightness) can also be adjusted to suit the subject. The LG510 uses digital electronic lines, which are more stable than analog lines when switching power on and off and more resistant to variations over time. We recommend using these for subject positioning.

Used to produce blur-free images of moving subjects by reducing CCD accumulation times and to adjust sensitivity (e.g., for the ALC function).

A single scan from the top to the bottom of the screen is called the field. With interlaced scanning, a screen formed of two fields is called a frame.

Refers to the distance from the lens flange surface to the imaging plane in the imaging unit.

Refers to the phenomenon of flickering light and dark screens when imaging under fluorescent lighting.

Refers to the number of frames captured per second. EIA format cameras are capable of 30 frames per second. Highspeed cameras achieve 60 fps, and high-resolution cameras 12 fps.

Refers to the ability to output all data for a frame when using a random trigger shutter. Conventional systems generally enabled the capture of only data for a field (at half the nominal vertical resolution).

For TV cameras, this refers to the signal output for incident light; for monitors, this is the relationship between image brightness and input signals. Linear characteristics (γ = 1) are preferred for TV systems.

The Ethernet connection format is specified by IEEE802.3u. Normally consisting of four pairs of unshielded twisted pair cables connected using RJ-45 connectors, this standard is compatible with the 10/100BASE-T format used in PC LAN networks. Supports data transfer rates of up to 1 Gbps. The main advantages of Gigabit Ethernet for FA cameras include the elimination of the need for dedicated data importing interface boards and the ability to use cables up to 100 m long.

An electronic shutter system in CMOS image sensors which enables exposure of all pixels simultaneously, as with CCDs. The electronic shutter systems used with earlier CMOS image sensors are called rolling or focal-plane shutters; these shutters typically produce anomalous images with moving subjects unless a mechanical shutter is used, since different pixels are exposed for each line at slightly difference times.

The frequency characteristics of an image signal, normally expressed as an output signal level for a constant sine wave input and the curve corresponding to the phase frequency.

Expresses the difference between the subject and the image displayed on the screen as a ratio of screen vertical dimensions.

Refers to the maximum sensitivity of a TV camera under practical conditions. If luminance drops below this level, noise tends to increase significantly, and problems arise with contrast detection.

Refers to the phenomenon in which fringes appear on the screen when imaging subjects with a fine grid pattern.

Achieves a wide dynamic range by compressing contrast on the CMOS sensor itself. This parameter can be manually set by the user, or a pre-set parameter can be selected from an external device.

Outputs images exposed using the external trigger signal according to the scanning signal with functions applying a random trigger shutter. Overlapping exposures are possible until the scanning signal is input, enabling strobe-like imaging with moving subjects if the trigger signal is input continuously during imaging. This can also be effective, when using multiple cameras, for inputting simultaneously-exposed images to a processing system by shifting the timing.

An abbreviation for "on-screen display", in which multiple setting menus are displayed on screen.

Indicates the type of synchronizing signal, as shown below. Negative polarity/Positive polarity

Images can be obtained at the desired timing according to the restart reset pulse input (VD input) for continuous HD input. This can be used to obtain high sensitivity with long accumulation times, since images are easily produced at low shutter speeds.

RoHS is an abbreviation for "Restriction of Hazardous Substances," a directive implemented by the EU in February 2003 to restrict the use of specified hazardous substances in electronic and electrical devices. A separate Chinese RoHS Directive also exists.

Refers to the phenomenon in which synchronization signal levels rise or fall during startup, etc.

Allows scanning of the screen in units of 1/16th of the screen area. Only adjacent units of rectangular forms can be selected; units of irregular shapes are not permitted. In scalable mode, the camera scans only the specified sections at standard speed, rapidly skipping over other sections, reducing the trigger interval when vertical clipping widths are small. Note that trigger intervals cannot be reduced along the horizontal axis due to the CCD sensor operation mechanism, even when clipping width is reduced.

Refers to the distortion between highlights and shadows caused by variations in imaging sensitivity, subject brightness, light transmittance through the lens, and CRT illumination. Shading noise is normally expressed as the degree of signal nonuniformity when the imaging unit is subjected to uniform illumination.

A sawtooth or parabolic waveform synchronized to the vertical and horizontal frequencies is normally added to the image signal to correct shading on-screen.

Special sensors capable of producing sharp, moiré free images without color filtering due to a three-layer photo-detector configuration that makes it possible to output RGB signals from each pixel.

Refers to bright banding that appears on screen in the presence of bright points of light in an imaging area. This phenomenon can cause vertical banding due to excessive charge build-up, particularly in TV cameras incorporating solid-state imaging sensors.

The ratio of a TV camera output signal to the noise component found within the signal. It is expressed as the ratio in decibels of the rated signal output to the output when light is shielded.

Imaging units may exhibit differences in sensitivity to different colors (wavelengths) and to intensity.

Refers to the luminance required to ensure optimal performance of TV cameras.

Refers to the superimposing of one signal onto another.

An abbreviation for "universal serial bus", this standard for PC serial interfaces was jointly announced by seven companies, including Intel and Microsoft. Data transfer speeds are 12 Mbps for full-speed mode and 1.5 Mbps for low-speed mode. (USB 2.0 permits transfer rates of up to 480 Mbps.)

VS is a B/W video signal combining video and synchronizing signals. VBS is a color composite video signal with a color burst signal superimposed on the VS.

Refers to the color balance for devices such as color TV cameras and color monitors. Adjusting the image so that white objects appear white is called white balance adjustment.

How to Use the Toshiba Teli site